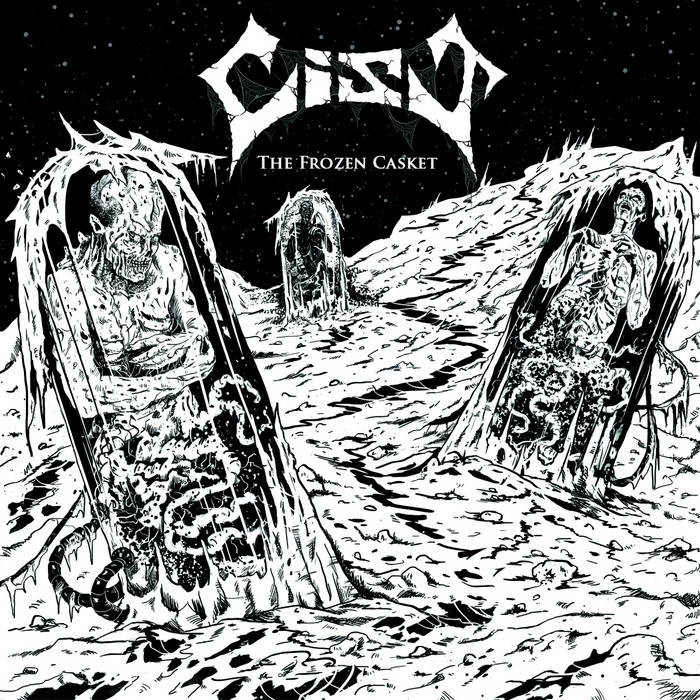 Jose Garcia 1st time hearing anything about CIST and Holy Shit!!! This EP literary rips your soul apart with its old school production of the late 80s Death/Thrash era with strong remnants of Death/Pestilence in their prime! Favorite track: Mitosis Simulation.

Come Back from the Dead

'...the band has taken the science of scorching vocals, gritty guitars ripping out excellent riffs, and a brutal yet precise rhythm section, and turned it into an art. It doesn’t hurt that the production fits the style perfectly, allowing the band’s concoction of Death, Obituary and perhaps some Persecution Mania-era Sodom to play exactly as intended.'
- Decibel Magazine
www.decibelmagazine.com/2018/02/09/pass-away-cists-frozen-casket/

"The Frozen Casket has rapidly gotten me completely obsessed. There is a sense of true heaviness that makes it exciting and the chainsaw guitar riffs possess the same magic that made old school Death so thrilling. This is a band who are attacking a side of the genre we don't get to see as much of in an era where Gatecreeper dominates the scene."
- Two Guys Metal Reviews
www.twoguysmetalreviews.com/2018/03/cist-frozen-casket.html

"The indomitable early death metal sound lives on healthily and heartily on The Frozen Casket, producing not a decent facsimile but an enthralling death metal record on its own merits."
Angry Metal Guy
www.angrymetalguy.com/cist-the-frozen-casket-review/

"Through and through The Frozen Casket is pure uncompromising and impressive death.......These tracks are addicting, malicious and oh so wonderfully heavy."
- Cadaver Garden
cadavergarden.com/2018/03/22/cist-the-frozen-casket/

" So many of the original bands have progressed and forgotten how things used to sound in the early days, so the world needs bands like Cist to remind everybody of how the death metal scene used to kick you in the face, rip your guts out and leave them to fester on your rotting corpse."
- Moshville Times
www.moshville.co.uk/reviews/album-review/2018/04/ep-review-cist-the-frozen-casket/

"Here’s an album that is sure to be a crowd-pleaser for people like me who are nostalgic for good ol’ Floridian death metal. You’ll know most of what to expect sonically on this album if you’re a fan of Death and/or Obituary, but I would encourage you to give this album a listen regardless because while it does sound like one of the best executed homages to this scene of OSDM that I have heard in a while, it still sounds like a completely fresh record all the same. "
- Canadian Assault
www.canadianassault.com/albumreviewsnewAtoD.html#cist

"The Frozen Casket is some of the realest shit you’re going to hear in 2018 – guaranteed to elevate your heart rate, get your fist pumping, and wreck your neck with the inevitable windmill bangs."
- Indy Metal Vault
(www.indymetalvault.com/2018/03/13/ep-stream-cist-the-frozen-casket/)

"...The Frozen Casket” is a sinister and exhilarating piece that doesn’t know when to let up, and Cist pulls it off wondrously and with much more skill than a great number of other underground bands of the world.
- Head Banger Reviews
(headbangerreviews.wordpress.com/2018/01/22/cist-the-frozen-casket/)

"Sounding like it could have been written by Death around the time of Scream Bloody Gore and Leprosy, The Frozen Casket is an exercise in old-school, gore-drenched brutality, filled with filthy riffs that recall the dawn of the death metal genre. The EP is consistently high energy, with a lot of speed and movement to it; riffs rarely sit still, and the structures are constantly shifting in natural, flowing ways. There’s a hint of Obituary to some of the riffs, too, with more than a hint of decayed flesh and graveyard dirt clinging to the recording."
- The Sound Not the Word
(thesoundnottheword.com/2018/01/22/review-cist-the-frozen-casket/)

"Cist executes the style of Old School Death Metal perfectly in a way that makes you feel that they were a band you may have missed out on in the 90s."
- Trve Kvlt Coffee
(trvekvltcoffee.com/2018/03/01/cist-frozen-casket-review/)

Smoldering in rotten decay, Russian Death Metal purists, CIST, infect the eardrums of anyone bold enough to tempt fate. Forging the fires of the past in order to lead the current pack of the modern "Old School Death Metal" movement, CIST pummel the listener with wildly brutal, yet tastefully melodic riffage, and harsh cryptic vocal fury. Thrashing and hammering in the vein of early Death, Pestilence, and Asphyx, CIST are a true testament to the legacy and power of Death Fucking Metal. Get this or die.

CIST was formed in 2014 in Smolensk, Russia, by Nick Komshukov after the breakup of his previous band Hell's Thrash Horsemen. Soon after the releasing their first demo "Synthetic Life" (2015), the band signed an agreement with a Greek label Alone Records to release their first EP "Chemcal Tomb" on 7" Vinyl.

Following the deal with Alone Records, CIST collaborated with U.S. Death/Thrash Legends, Solstice on a split CD released by HTH Records and Unspeakable Axe Records. In support, CIST embarked on a Russian Tour with a Thrash Metal band Entrace.

In 2016 the band recorded a new demo "Cryonesia" and started tracking their new EP, which became "The Frozen Casket". After 2 years of silence "The Frozen Casket" EP (2018) was first released in February 2018 by HTH Records & Metal Race (Russia) followed by a cassette release via Camo Pants Records (UK) (camopantsrecords.bandcamp.com) in March. A Special Extended 6 Panel Digipak Version, including 3 bonus tracks, will be released in late April courtesy of Redefining Darkness Records & Reaper Metal Productions (U.S.)

Bandcamp Daily  your guide to the world of Bandcamp

Cannibal Corpse's George "Corpsegrinder" Fisher stops by for an interview